Locke & Key Wiki
Register
Don't have an account?
Sign In
Advertisement
in: Keys, Keys in the Netflix Series

Allows the control of plants

The Thorn Key, also known as the Plant Key[2], is one of the keys.

Dodge used the key in his series of attacks on the Locke family in February. However, the Lockes were able to fend him off through unknown means, although injured.[3]

The Thorn Key, renamed as the Plant Key, was one of the keys possessed by Rendell Locke and his friends. At an unknown point in time, Rendell Locke used the key to hide Duncan's memories — presumably taken by the Head Key — in the cemetery of Keyhouse Manor.

Sometime in the future, Kinsey and Tyler discover the memories when they hear the key calling to them. They realize that Duncan previously knew about the keys, and even get a glimpse into their father using the Ghost Key. They also find out that Rendell's friends — who supposedly died in the caves — did not actually die this way.[4]

It is later revealed that Duncan witnessed Rendell killing Lucas after he killed their friends. They took away his memories and hid them somewhere nobody would find them, inventing the story that the children drowned and were washed away to sea.[5]

After murdering Erin, Dodge uses the Plant Key to have her body consumed by vines.[7]

Enraged by Duncan turning her demons against her, Dodge uses the Plant Key to collapse her cliffside house into the sea, killing her remaining demons. After Tyler kills Dodge with the Alpha Key, the real Lucas returns the Plant Key to the Lockes along with all of the other keys that Dodge had on her at the time of her death.

A week later, Tyler gives the Plant Key to Kinsey before leaving on a road trip.[8]

The key allows its user to control plants.[3][9] The key can be used in the greenhouse. Once it "unlocks" an artifact in the greenhouse, vines grow out of it rapidly. There are roses on the vines, resembling the face of the user. Apparently, the vines are sentient and follow the will of the one who activated them.[3]

In the Netflix series, the key can store items within the roots of a tree, the keyhole manifesting on the tree itself. Rendell used it to hide Duncan's memories in Keyhouse's cemetery. Tyler and Kinsey then used the key to uproot the memories from the tree.[4] Kinsey and Scot also use the key to film a scene for The Splattering, where a vine wraps itself around Kinsey's leg and drags her across the ground.[9]

According to executive producer Meredith Averill, the Plant Key in the Netflix series can be inserted into any plant, tree or root, thus allowing the user to control said flora.[1]

By inserting the key into an earthen wall, Dodge was able to cause vines to emerge and collapse an entire cliffside house into the ocean.[8] 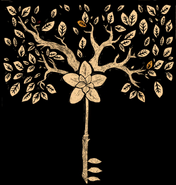 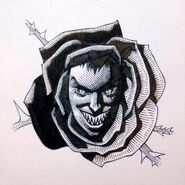