Sam Lesser was a former student at Tyler Locke's school in San Francisco, who later attacked the Locke family on two separate occasions.

Sam was born into an abusive family: his parents were neglectful and violent. He began to speak to his school's guidance counselor, Rendell Locke, about getting a letter of recommendation to attend college. Rendell eventually declined, explaining that he was worried about Sam's mental state.

Sam was also frequently bullied at school. He eventually snapped, biting a bully who was harassing him. Sam was sent to see Rendell again. He overheard Rendell arguing with his son, Tyler, before Tyler stormed out of the office.

During Sam's meetings with Rendell, Sam was contacted by Dodge, who, using the Echo Key, appeared in photos in front of Sam.

Outside, Sam approached Tyler, who was still furious with his father. Sam said that Rendell seemed like a good man, but that he hated his own father so much he wanted to kill him. Tyler replied that if Sam ever killed his own father, to go ahead and kill Tyler's father, too.[1]

Under Dodge's instruction, Sam and Al Grubb attacked the Lockes at their summer home in Willits. Sam held Rendell at gunpoint, demanding to know the location of the Anywhere Key and the Omega Key. Rendell refused, and was killed by Sam. Al was killed by Nina Locke, while Sam was eventually beaten unconscious by Tyler.[2]

After being arrested, Sam was sent to San Lobo Juvenile Detention.[3]

Sam was again contacted by Dodge, who used the Echo Key to send Sam a mirror and a pair of scissors.[3] Sam used the items to break out of his cell, killing at least two guards in the process.[4]

After escaping, Sam headed towards Lovecraft to confront the Locke family and find the Anywhere Key and the Omega Key for Dodge. He hitchhiked while performing sexual favors, and murdered many more people who suspected his identity.[1]

Arriving at Keyhouse in Lovecraft, Sam beat Kinsey Locke unconscious with a flashlight, and dragged her body to the cellar, where he locked Nina and Duncan. 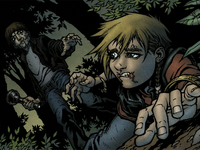 Tyler, hearing his mother calling, attempted to find her but was also taken captive by Sam.[5]

Nina told Tyler to take Sam to her bedroom, claiming to Sam that the keys were there, but signaling Tyler to use the gun in her dresser. On the way, Sam taunted Tyler about his father's last moments, reminding Tyler that he had asked for it.

After Tyler got his mother's gun, Sam managed to disarm him. Tyler ran, and fell through the Ghost Door, convincing Sam that he had killed Tyler.

Sam dragged Tyler's body to the cellar, while Bode traded the Anywhere Key to Dodge in exchange for his family's safety.

Tyler's ghost returned through the door, waking up in his body, where he attacked Sam. Kinsey, taking the gun, shot Sam twice. Dying, Sam staggered upstairs, where Dodge paralyzed him and threw him through the Ghost Door. His body dead, Sam remained a ghost at Keyhouse.[6] 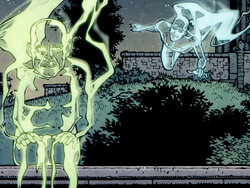 When Rufus Whedon visited Keyhouse, Sam discovered that Rufus could see him in his ghost form. Sam started talking to him in the form of an army sergeant and told Rufus the truth about Zack Wells and revealing his plan to open the Black Door, then telling him that he needed to kill him. After Rufus refused to commit himself to kill Dodge, Sam told him of a way to incapacitate him permanently, by bringing him back to the Wellhouse.[8]

After Dodge was exposed to the Locke children, he kidnapped Bode, and brought him through the Ghost Door, telling Sam that he was completing his part of their bargain. Sam entered Dodge's body, while Dodge entered Bode's, leaving Bode stranded as a ghost.

Sam, unaware that Dodge's true identity had been revealed, was soon killed by Kinsey Locke.[9]

Retrieved from "https://lockekey.fandom.com/wiki/Sam_Lesser?oldid=9960"
Community content is available under CC-BY-SA unless otherwise noted.