Season 3 has premiered on Netflix. This wiki contains spoilers for episodes of the final season. Read at your own risk.

Edit
Spoiler warning!
This article contains plot details about an upcoming work, story, or episode. If you haven't seen it yet and you don't want to know anything, stop reading now.
“
Your house is filled with amazing keys.
”

The Keys of the Locke family are a variety of magical keys that are found hidden throughout the Locke family home, Keyhouse Manor. The original Keys were crafted by Benjamin Locke during the eighteenth-century Revolutionary War. After Benjamin, many more keys were made by others, including: Harland and Tyler Locke, even Hans Riffel.

“
The keys... they can bring about the greatest good, or the darkest evil, and you, the maker, get to decide.
”

During the war in 1775, soldiers discovered and opened the Black Door in the Drowning Caves, thereby releasing demons. In order to seal the door shut, Benjamin crafted a padlock and a key from Whispering Iron — which he claimed had been tempting him.[1] He later crafted numerous other keys,[2] as did many of the Lockes that came after him; these keys remained with the Locke family and were often used by them.[3]

In 1775, Benjamin Locke, with collaboration from his sister, Miranda, began the practice of forging keys from Whispering Iron, starting with the Omega Key. The process required alchemy to bestow them magic, and only the person hearing the whispering from the Whispering Iron could make the key because "making a key is a conversation between the Whispering Iron and the key maker."[5]

Duncan learned how to make keys from the ghost of Chamberlin Locke. While teaching Tyler how to make a key, Duncan tells him that a key gets its magic from the intention of the key maker and that he needs to close his eyes and focus on the intention of what he needs the key to do. Once the key maker has focused their intention for the key, they add their blood to the melted-down Whispering Iron before pouring the molten metal into the key mold. Once its in the mold, the key can take anywhere from a couple of minutes to a couple of hours to harden, as every key is different.[6] He also tells Dodge that the blood used to make the key must be Locke blood for it to work.[7] This may because they are descendants of Benjamin Locke, the first person to create the keys who showed no sign of magical talent before making the Omega Key and in fact needed his sister's help to figure out the alchemical process.[6]

Similar to the comics, the keys were implied to be active in some form, since they would whisper at specific instances in order to be found by the Lockes. After being led to the Memory Key by the whispers, Tyler suggests to Gabe and Logan that the keys only lead the Lockes to them when they need the particular key in question the most.[8] When asked about the nature of the keys, Duncan stated that while the Whispering Iron is from the demon world, its power can be reshaped to bring about the darkest evil or the greatest good "and you as the maker get to decide."[6] Kinsey also theorized that the keys allow people to find them for purposes that are neither good nor evil, but they simply desire to be used.[9]

The keys have a supernatural type of ownership with the Lockes. Demons such as Dodge are unable to take the keys from the Lockes by force, and must be willingly given to them. This principle was exclusive to demons, as humans outside the Locke family could also take these keys without asking for permission. Since Sam Lesser took keys from the Locke children, then Dodge took the same keys from him without his permission,[11][7] a demon's inability to take keys only applied if the owner was a Locke; and in extension, served to indicate humans that were possessed.[12][5] Should a demon manage to take a key from a Locke, it burns and presumably causes extreme pain to them.[9] While Gideon had the same limitations, he got around them by using Samuel Coffey and James Bolton to steal the keys for him.[13] However, people who were married into the family, such as Nina Locke, are not recognized by the rule.[9] Demons that switched bodies with a human through the Ghost Key can take keys willingly, as a time-displaced Dodge was able to take a key in Bode's body.[14]

When the keys were in the hands of Gideon, he could channel their power to open localized cracks to the demons' realm. The size of the cracks was determined by the number of keys he had on hand, with the more keys he had widening the gateway.[9] By returning the keys through the portal, the crack would mend itself and close its connection to Earth; however, this process did not appear to require all the keys returned, since the Lockes could still hear whispers inside their house while suggesting more keys were still hidden inside the manor.[15]

“
There's a key that can let you step outside your body and be a ghost. And another that can change the way you look. The best is the key that can take you anywhere in the world you wanna go if you know how to use it. It's made of gold and has six interlinked circles.
”

indicates that the key solely appears in the Netflix series; they are not mentioned nor appear in the graphic novels.

indicates that the key appears in the graphic novels, but was redesigned and/or renamed in the Netflix series.

indicates that the key first appeared in the Netflix series, but was later integrated into the graphic novels.

These keys have not made an appearance in the official comics but appear in merchandise, promotional tie-ins, and/or non-canon materials.

These keys can be seen in art but were unused. Note that the names are not official.

Yin-Yang Key, as seen in the last panel of "Welcome to Lovecraft" Chapter 6.

Toy Key, as seen in the last panel of "Welcome to Lovecraft" Chapter 6.

Illuminarti Key, as seen in the last panel of "Welcome to Lovecraft" Chapter 6.

Illuminarti Key as it appears in the Glass Ceiling.

Freemason Key from the Glass Ceiling.

Scepter Key, as seen in the last panel of "Welcome to Lovecraft" Chapter 6.

Compass/Star Key, as seen in the last panel of "Welcome to Lovecraft" Chapter 6.

Unknown Key, as seen in the last panel of "Welcome to Lovecraft" Chapter 6.

Unknown Key, as seen in the last panel of "Welcome to Lovecraft" Chapter 6.

Locks that hint at potential Keys[]

These are locks that are seen in the art that could hint at the existence of potential Keys. Names are not official.

Radio with a keyhole shape and bears the Locke Family logo. Could be the lock of a potential Key. 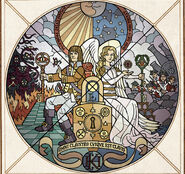 The Stained Glass Ceiling of Keyhouse. The padlock in the center could be the keyhole of a Key.

Jean and Mary's pet cat Tiberius with a lock on his collar. 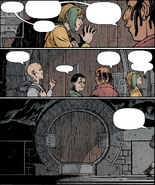 Kinsey and her friends encounter Omega Door #1 in CoS #2.

Rendell Locke and the Tamers of the Tempest passing by Omega Doors #1, 3, & 5 with #1 opening by the Anywhere Key.

Penny-farthing bicycle with Keys as its wheel spokes and a lock on its handle.