Season 3 has premiered on Netflix. This wiki contains spoilers for episodes of the final season. Read at your own risk.

Allow the user to become a ghost

Bode Locke
Dodge
The Ghost Key is one of the oldest Keys created by Benjamin Locke.

The Ghost Key was forged by Benjamin Locke on January 24th, 1775.[1] Which he used to spy upon the rebels and Miranda Locke in the Drowning Caves.[2] It was the second Key to be created by the Locke Family after the Omega Key.

During the Depression Era, the two sons of Mary Locke used the Ghost Key to kill one of the gangsters who had invaded Keyhouse.[3]

The key is rediscovered by Bode Locke on top of the threshold of the Ghost Door in 2011.[4] When Sam Lesser's body is thrown through the door shortly after Dodge paralyzed him, his spirit became trapped in Keyhouse.[5]

In 2012, Dodge kidnapped Bode and brought him to the Ghost Door, where he called for Sam to offer him a body. Sam entered Dodge's body, while Dodge entered Bode's body, stranding Bode as a ghost.[6] As a ghost, Bode wandered Keyhouse for months trying to warn his siblings of his imposter, although he partially succeeded in getting the message to Rufus Whedon.[7] After Dodge's defeat, a sparrow that Bode befriended flew through the Ghost Door Tyler opened for it, offering its body for Bode's return to life with the help of the Animal Key.[8]

The Ghost Key allows the user to become a ghost when they pass through the Ghost Door.

The ghost seems to be a representation of the individual's soul. When the infected soul of Lucas Caravaggio passed through the door, the demon could be seen "attached" to his ghost. The ghost may not be seen or heard, except by other ghosts,[9] by Rufus Whedon,[10][7], or those under alcoholic influence.[11] Ghosts can see and hear, however, and can, therefore, gain information with it.[12]

Ghosts can teleport to people they think about, or may be summoned when other people think about them.[13] They can also teleport themselves to the locations of objects or things they never have seen before, only by knowing and thinking of the name of the object.[14][5][9] The ghost itself is confined to Keyhouse.[citation needed]

Ghosts can alter their appearance to some extent. Dodge was able to change his ghost's gender, and Sam Lesser was able to "dress" his ghost in military equipment.[10] Both ghosts were able to manifest weapons when they fought, Dodge using a fencing saber and Sam using a chainsaw.[9]

When more than one ghost enters the same body, they can attempt to wrest control over the body from each other.[9]

To return to "life", the ghost simply needs to return through the Ghost Door. They will wake up in their body, even if their body has been moved. Or, they could enter another vacant body left behind by anyone or anything that had became a ghost, even if the body is a different species. If there is no living, "empty" body to enter, the person may be stranded as a ghost.[5][6] If the door is closed before the ghost returns to their body, they are stuck as a ghost forever, as the body dies.[15]

The Ghost Door is an exterior-facing door located in the winter study on the East side of Keyhouse.[5][3] The door handle has a skull on it, like the key. The Ghost Door is "activated" by using the Ghost Key first, after which multiple people may become ghosts.[6] If opened with any key other than the Ghost Key, it acts as an ordinary door, and will not turn people into ghosts.

Section of the First Floor Blueprints and Colored Map with the Ghost Door Circled in Red. 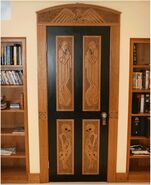 Replica of Ghost Door made by Skelton Crew Studios

Ghost Door as it appears in the Netflix Series.

"onlee in occasionull daith do I find peece now, for with the bode caste aisyde, it is possibull for one to know his own ETERNAIL SOULE. My spairt cannot leeve the grounds of Keyhowse, but heyre I walke laike an aingel! I aim everywhare and nowhare at once, from the tall's towair, to the deepst caves. It is hard to dreem thaire could be any dore more terryble or wondairfulle than that wych dyvydes deth from lyfe, yet my expairances at the thraishold of the black dore have teach'd me thair are worse things than to dyye..."

Pinhead in possession of the Ghost Key

"Echoes of the Past: Castle of Shadows" HOP scene with the Ghost Key circled in red.