Ellen "Ellie" Whedon was a coach at Lovecraft Academy and the mother of Rufus Whedon.

Ellie presumably grew up in Lovecraft, where she lived with her physically and emotionally abusive mother, Candice.

In her teenage years, attended Lovecraft Academy with Rendell Locke, Lucas Caravaggio, Kim Topher, Mark Cho, and Erin Voss.[1] She was romantically involved with Luke, and gave him the nickname "Dodge".[2]

Ellie and her friends became aware of the keys of Keyhouse, and during their senior year, used them in the school production of "The Tempest".[1]

The play was a huge success, and Rendell brought up the idea of opening the Black Door to let a demon through, that would become Whispering Iron. He hoped to make a new key that would help them bypass the Riffel Rule, and allow them to carry some magic with them even into adulthood.

Everyone eventually agreed, but the plan failed due to the arrival of Duncan Locke, who had been curious about what they were planning. Protecting Duncan, Luke became possessed by the demon known as Dodge.[2]

Using the Head Key, Rendell and the others removed all of Dodge's memories, much to the distress of Ellie, who realized he wouldn't remember that he loved her. The memories were put in jars, and safeguarded in the Wellhouse, by an echo of Rendell's mother.

Ellie visited the Wellhouse regularly to sit with the memories. She was eventually followed there by Dodge. When Rendell's mother attempted to hold him off, Ellie panicked and pushed her through the door of the Wellhouse, causing Rendell's mother to dissipate. Ellie was then rendered unconscious by Dodge.[3]

Her body was later found by Mark, who used the Owl Key to gather the others. He was soon stabbed by Dodge, however, and as he died, wrote a note which he placed in Ellie's hand. Dodge, having kidnapped Duncan, removed a piece of himself with the Head Key, and had it stashed in Ellie's house as a backup.

When the others went to the Drowning Cave to save Duncan, Ellie woke up next to Mark's body, and found the note, explaining that Dodge took Duncan, and directing her to a secret entrance to the cave.

Using the Owl Key, Ellie disarmed Dodge by taking the Shadow Key from him. However, she was too late, as Kim had already been killed, and Erin's memories were all taken from her and scattered throughout the cave. As Dodge died, he taunted Ellie once more.

Sometime later, Ellie and Rendell met outside Keyhouse. They said their goodbyes to each other, and Rendell tossed the Head Key into the pond.[4]

Ellie eventually became a coach at Lovecraft Academy. She had a son, Rufus, with a man named Gil. Rufus had a mental disorder, which caused a strain on her relationship with Gil. After he said that Rufus should be taken to a care facility, Ellie kicked him out.

She eventually happened upon Dodge's failsafe: a glass jar with the fragment of Dodge in it, Echo and the Gender Key's, as well as the note to go to the Wellhouse. The fragment inserted itself into Ellie's head.

Ellie, weary of her mother's abuse of her and Rufus, decided to kill her by pushing her down the stone stairs behind Keyhouse. She could not bring herself to do it, however, and ran to the Wellhouse. She said Dodge's name, summoning him as an echo, who killed her mother. Because of the fragment of Dodge, Ellie herself did not remember what had happened by the time she got her mother to the hospital.[5]

After news spread that Sam Lesser escaped from the juvenile detention center he was incarcerated in, Kinsey felt sick and vomited out of Ellie's window. When Kinsey expressed her frustration with everyone watching her, Ellie offered the advice that Kinsey could not control the people looking, but could control "what they see when they look". Offering Kinsey a drink of water, Ellie noticed her bracelet. Kinsey explained that the bracelet was a gift from her father.

When Kinsey left, Ellie inspected her old yearbook for a photo of her and her old friends, including Kinsey's father, Rendell Locke.[6]

After Dodge escaped the wellhouse, he arrived at Ellie's home, and began living there posing as Ellie's nephew, under his new alias, Zack.[7]

Dodge eventually determined that Ellie is no use to him if she lost her mind. He decided to remove the fragment of himself he left in her head to control her. Using the Head Key, he removed the fragment, as well as her memories of Lucas Caravaggio.[5]

Keys to the Kingdom[edit | edit source]

Tyler Locke, having concluded that Zack was really Dodge, went to Ellie's home to investigate. Talking with Ellie, he realized her memories had been altered.[8] 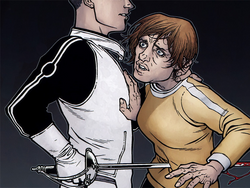 Dodge returned during the investigations of Tyler and Daniel Mutuku, who had noticed similarities in the X-Rays of Candice Whedon and Sam Lesser. After disarming Detective Mutuku, Dodge stabbed Ellie in the stomach. As she died, her memories of Luke returned, and she apologized to him for not being able to save him. Dodge feigned sincerity before tearing her bottom lip off with his teeth.

As Dodge escaped with Bode Locke as his hostage, Rufus entered the room to find his mother's body. He answered a phone call from Kinsey, and after explaining to her what Dodge had done, returned to Ellie's body so she wouldn't be alone.[9]

After Tyler Locke used the Alpha Key to restore Lucas Caravaggio's soul, Lucas apologized for everything he did. Speaking to Tyler of the afterlife, he expressed his desire to "find Ellie", and to spend "all of eternity [begging] her to forgive [him]." As Lucas died, Tyler assured him that it wouldn't take that long.[10]

Retrieved from "https://lockekey.fandom.com/wiki/Ellie_Whedon?oldid=9721"
Community content is available under CC-BY-SA unless otherwise noted.