26
Bode Locke is the six-year-old son of Rendell and Nina Locke, the younger brother of Tyler and Kinsey Locke, and the nephew of Duncan Locke.

He is the member of the Locke children who finds almost all the Keys, which is described as the house "showing" him.

While his family was staying at their summer house in Willits, they were attacked by Sam Lesser and Al Grubb.[1] During the assault, Bode was taken to the roof by Kinsey, who squeezed him so tightly he bruised.[2]

Though Al was killed and Sam was beaten by Tyler and taken into custody, Bode's father, Rendell, had already been killed. As per Rendell's last request, the family moved to Keyhouse after Rendell's death.[1] 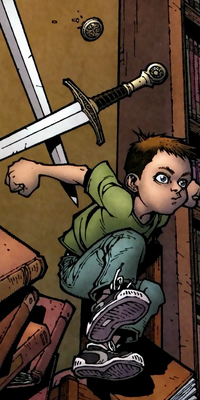 Shortly after arriving at Keyhouse, Bode was exploring, and found the Ghost Key on top of a door frame. When he used it on the nearby door, he discovered that passing through it allowed him to step out of his body as a ghost, while his body crumpled to the ground.[1]

Bode continued to experiment with the Ghost Key, flying around Keyhouse and watching his family. He attempted to share the experience with Tyler and Kinsey, but they did dismissed his claims as make-believe. A few days later, Bode heard a noise from the Wellhouse, a small structure the family was warned from entering since it was falling apart. He entered it, and heard a voice coming from the well. Bode ran to tell Tyler and Kinsey, who checked the well, but again assumed Bode was imagining things.

Becoming a ghost, Bode looked down the well and saw a Lady there. He eventually returned in his body, talking with her. She described the Anywhere Key to him, a key that can be used to turn any door into a gateway that can take someone anywhere they wanted to go. The Lady said she needed that key, as she was an echo that would fade away if she left the front door. At the Lady's request, Bode delivered the lady a mirror and a pair of scissors, so she could cut her hair.

Unbeknownst to Bode, the Lady transported the items to Sam Lesser,[3] which he used to escape the detention facility.

Bode again tried to show Kinsey how to use the Ghost Key, but she assumed he was just faking it when his body fell to the floor. She becomes curious, however, when he woke up and mentioned their mother was talking to the man whose name meant "born at night". She later discovered that Bode was referring to Daniel Mutuku, who had come by to warn the family of Sam Lesser's escape.[2]

Bode had a recurring dream where his father started to tell a knock-knock joke: "Who-who?" He asked Tyler, Kinsey, and Duncan, who remembered it from when he was a child, "what, are you an echo?"[4] Bode returned to tell the joke to the Lady in the well, who had claimed to be an echo. He told her he would not be coming to see her again, and that he didn't believe her story that Bode had made her.

When he was called by Kinsey to return to the house, he turned to call back to her when the Lady rose from the well and grabbed him. She told him that Sam Lesser was at the house, and that he would kill everyone unless Bode delivered her the Anywhere Key.[5]

Bode became a ghost, and tried thinking of the Anywhere Key, hoping he would appear next to it. Appearing next to Kinsey, Bode realized that the key was in her bracelet, a gift from their father. He returned to his body and delivered the key to the Lady.

The Lady used the key to enter Tyler's room, and then used the Gender Key to become a young man. Bode arrived in the cellar in time to see Kinsey shooting Sam Lesser, who escaped up the stairs. Out of sight from the Lockes, the former Lady paralyzed Sam, and threw him through the Ghost Door.

Two weeks later, the Lady had adopted the identity Zack Wells, and introduced himself to the Lockes. Bode seemed hesitant upon meeting him. As Tyler, Kinsey, and Zack headed to the beach, Bode found the Head Key in the pond outside the manor.[6] 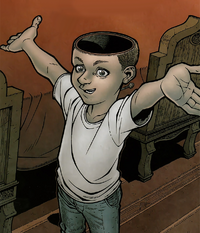 Bode spent some time trying to find a use for the Head Key before realizing it made a keyhole appear on the back of his own head. Realizing that he could open his head, he showed Tyler and Kinsey, who finally believed him.[7]

The Lockes experimented with Bode's head, learning that they could insert information or remove memories. They examine Bode's memory of the Lady from the well, as well as an old neighbor, and determine that the representations in the memories are not always accurate.[8]

After Tyler showed the Head Key to Zack Wells and Jordan Gates, Kinsey and Bode discussed the Lady from the well with Zack. Bode claimed he would recognize her in an instant if he ever saw her again, unaware of she had become Zack.[9]

Bode, frustrated that Tyler and Kinsey took the Head Key from him, stole Tyler's hat. Hiding from Tyler, Bode found the Giant Key under a rug. When Zack Wells used the Shadow Key to bring all the shadows to life, Bode's shadow took the form of Peter Pan after seeing the bedtime story Tyler read to him.[10] 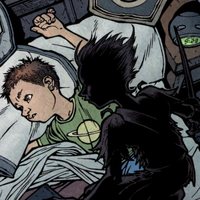 Being dragged through the house by his shadow, Bode grabbed the door to the refrigerator. When it opened, the light forced the shadows from the room. He barricaded himself in the kitchen, letting Kinsey in when she broke free of her own shadow.

When the shadows cut the power to the house, Kinsey took Bode outside. After Zack called all the shadows to himself, taking the form of a large wolflike creature, Tyler used the Giant Key, and fought Zack.[11]

Bode went to his mother after falling down trying to get the Mending Key, which he saw on top of the tank in the bathroom. He found her watching a home movie of his father juggling, which he tried to replicate the next morning at breakfast. His mother, drunk, tried to juggle, but only managed to break several plates, increasing tension between her and Tyler and Kinsey.

After Nina discovered the Mending Cabinet's powers, she tried to use it to Rendell, by putting his ashes in. When it didn't work, she broke down, beating at the cabinet. There was a confrontation with Tyler and Kinsey, which culminated in Rendell's urn breaking, and Nina slapping Kinsey. When Kinsey threatened to leave forever, Bode cried for everyone to stop fighting.

When Bode helped his siblings clean up the mess, Tyler found the Omega Key in his father's ashes.[12]

Keys to the Kingdom[]

At his mother's insistence, Bode went outside to make some friends, but ended up just making a snowman. He soon found the Animal Key in a birdbath, and was transformed into a sparrow after using the Animal Door. While he flew around, Zack Wells entered the Animal Door and became a wolf.

Zack and several other dogs surrounded and attacked Tyler and Kinsey. Bode asked the other sparrows for help, and the birds proceeded to bombard the dogs, driving them back. Zack eventually fled, and Bode went back through the Animal Door. He returned to the site of the battle, and cried at the sight of all his dead friends. Sometime later, at school, Bode made a friend in Jason Bird, who pretended to be a sparrow with him.[13]

Bode eventually found the Skin Key, and offered to help Kinsey talk to Erin Voss, who Kinsey believed would not speak to her for being white. They went to McClellan Psychiatric Hospital, and Bode read stories to the patients in the reception area while Kinsey went to Erin's room.

Not realizing the man Zack had just killed in Erin's room, Kinsey and Bode fled the hospital when the nurse believed Kinsey killed the man. When they were clear, they used the Skin Key, and returned home.[14]

Over the next several weeks, the Lockes were attacked by Dodge several times, and defended themselves with new keys, including the Angel Key and the Hercules Key.[15]

Tyler, growing increasingly suspicious of Zack, offered to take Bode home from Zack's fencing tournament. They stopped by Zack's house, under the pretense of having Bode return one of Rufus Whedon's action figures. Tyler looked through Zack's room and realized that Zack was the Dark Lady. Zack returned home, and Tyler was frozen by the Music Box Key.[16]

Zack went downstairs, and fought Daniel Mutuku, who had become curious about Ellie or Zack's involvement in Joe Ridgeway's murder. Bode and Rufus went downstairs during the commotion, and Bode was taken hostage by Zack while Rufus stayed in the kitchen with his mother, who Zack had murdered.

Zack took Bode back to Keyhouse, calling out for Sam Lesser. Zack explained that he would inhabit Bode's body, while Sam could take Zack's. Zack threw Bode through the Ghost Door, before taking Bode's body himself. Sam inhabited Zack's body but was then killed by Kinsey. Bode, trapped without a body, was unable to communicate with anyone, or warn his family that Dodge was impersonating him.[17] 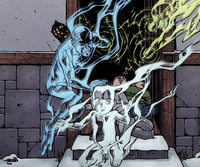 Bode remained a ghost while Dodge inhabited his body. He was finally able to communicate with Rufus Whedon, who came by Keyhouse to say goodbye before he was moved to Boston after his mother's murder. After Bode warned Rufus about Dodge, Rufus attacked Dodge, in Bode's body. Rufus was subdued by Tyler and sent to McClellen Psychiatric Hospital.[18]

After Dodge forced Nina to drink,[19] Bode was able to communicate with her. He helped her stand up by speaking with her, and she was able to reach the phone to call Daniel Mutuku for help.[20]

After Dodge was defeated, Bode's body was cremated. Tyler went to the Keyhouse ruins after Jackie and Scot's funeral and followed a sparrow to the active Ghost Door through which it flew through. Bode used the Ghost Door to enter the body of the sparrow and guided Tyler to the Animal Door, and Tyler used the Animal Key. Bode flew through the door and he transformed back into his original human form. Tyler called his family and Bode was reunited with them, explaining the events of what happened, to his mom. He also asked the Rufus be part of the family, which the rest of Lockes happily agreed. [21]