Opens a door to a carnivorous mouth

Mary Locke
The Bitey Key, also known as the Grindhouse Key, was one of the Keys.

On some time, Mary Locke used the key in order to get rid of one of the gangsters.[1]

The key was undiscovered by the current Locke generation until recently, when Bode Locke somehow found it.[2]

This key can presumably be used in any door. However, based on artwork for the unaired Hulu/Fox series, the live-action Bitey Key would have had its own door.[3] 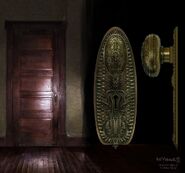 The Bitey Door concept art as it would've appeared in the Hulu/Fox series.

"Teeth Room" concept art as it would've appeared in the Hulu/Fox series.

When used to open a door, said door becomes a mouth with teeth and a tongue. The teeth close when a person enters, eating them.[2][1]