In 1851, the Animal Key was used by Harland, Ulysses, and Clint Locke in their search for Delacorte, who had been sold by a man named Hammersmith to somebody in Georgia. Ulysses used the key to become an eagle to find Hammersmith. After locating him, Clint became a cougar and mortally wounded Hammersmith before Harland had to restrain him.[1]

In the 1930s, the two sons of Mary Locke used the Animal Key to transform their pet corgis named Lloyd into a human boy.[2]

Decades later, the Animal Key was discovered by Bode Locke in a frozen fountain,[3] though it was originally hidden in the Hunting Trophy's Room.[4] He used it to turn into a sparrow, while Dodge used it to turn into a wolf. When Bode was trapped as a ghost and his body destroyed, he eventually occupied the body of a recently deceased sparrow, and Tyler used the key, allowing Bode to transform from a sparrow to his original human form.[5]

A map of Keyhouse from the safe of Mark Cho, has a depiction of the Animal Key, implying it's existence in the Netflix series. This map is subsequently burned along with Mark and several other papers with the Matchstick Key in order to prevent them from falling into the hands of Dodge.[6]

The key opens the Animal Door. When a person climbs through the door, they transform into an animal and can communicate with other animals of the same species. Returning through the door turns a person back into a human.[3] It is unclear whether there is a way to choose what animal species you become, or if it is a reflection of the person.

The Animal Key can also do the exact opposite, and transform animals into human beings when they enter from the opposite side of the door.[2] This has the same effect for human ghosts that have possessed animal bodies.[5]

The Animal Door is a two-panel door on the outside of Keyhouse property facing the east side. The door is not located in Keyhouse, but below in a wall that forms part of Keyhouse Plaza.[5][4] 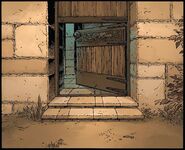 "...Ulysses said he would fly all the way to Hell if he had to, to find Delacorte for me. Clint said he would probably only be required to fly to Georgia, but that the two places were much alike, except Georgia is a bit hotter. We have fought a thousand times, my brothers and I, but this morning I felt I could not love any living souls more. Ulysses stepped through the door and emerged on the other side, a golden eagle. He gave me a short, lordly look, and took to the skies..."